PANDAEMONIUM? IT'S CHAOS IN HERE, I TELL YOU. CHAOS.

As I (fail to) understand it, there are twelve particles and four forces and that's it. The entirety of everything, made up of twelve of these and four of those in various combinations. That's at the quantum level, but hey. What isn't?

Thing is, it all sounds ... organised. Sorted. Which, yeah. At the quantum level, maybe. Up here, let me tell you? Not like that. Never mind the individual mess which I am able to generate, support and maintain on a daily basis; the universe as I encounter it seems not so much random as deliberately shuffled out of order. Hell, we need a special word - serendipity, and they don't get much more special than that: I like to envision the hand of Fate serenely dipping in the sawdust-barrel of chance - for when something happens to turn up in the right place at the right time, it's so rare.

Take the Daemonomicon, f'rexample. (That's the secret series title, by the way. It's like mouseover text, my books often have secret labels on other levels, up or down. The hierarchy of metadata and commentary: discuss.) It's an incomplete trilogy, that goes Desdæmona, Pandæmonium, Dæmonogamy. It's like a progression: dating, going unsteady, settling down. This followed by that followed by the other thing. But no, of course it's never been that neat. I didn't think of the titles in that order; I didn't even have the titles in that order, until this year. And I've had them all for a decade or more, one for very much longer. I was in my twenties, in my first flat, listening to Radio 4; I guess someone must have said "monogamy", because I thought, Oh - "Demonogamy"! Sounds like a short story to me. About being married to a demon, I guess. I should write that...

And I didn't write it and didn't write it, because that's not an idea, it's just a notion. One axis doesn't make a grid. Stories happen when two or more notions collide and entangle. I used to say that I could keep a notion fresh for years, waiting for its partner to turn up; these days, I get to say decades.

As witness. Twenty-odd years later, I was walking past a building-society window, and a poster had the word pandemonium in its text. Don't ask me why; I have no idea. But I misread it, or I played games with it, one or the other; I walked on with Pandæmonium in my head, and it sounded like a title to me. A partner, of course, to Dæmonogamy.

Desdæmona came later, last of the three. Obviously it needed to be first of the trilogy; I thought the series would run Desdæmona, Dæmonogamy, Pandæmonium. From one to two to many, from single to married to kids. Oh, and I thought it would be science fiction. Cyberpunk, with avatars, set in Taiwan: starting with a great clock in a public square in Hong Kong, counting down the hours until the Chinese handed the territory back to the UK, in a privatising-the-national-assets sort of way. 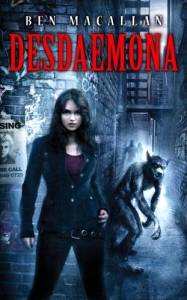 Ten years later I actually started writing Desdæmona. As an urban fantasy set in the Home Counties, with immortals. And when Solaris commissioned the sequel, it turned out to be Pandæmonium that came next; and the first thing that happened was the cover.

I told you. Everything, in all the wrong order. We had the same cover artist lined up, the wonderful Vinny Chong; my editor kept asking me for a brief for him, "Chaz, give us an image, a description, a character, a plot-point, anything for Vinny to work from," and I kept saying, "How can I do that? I haven't written the book yet! I don't know what happens, I don't know who's in it. I know it switches narrator, I know it's Desi's book and I know where it starts, immediately after Desdæmona ended, but that's all I know. Leave me alone..." 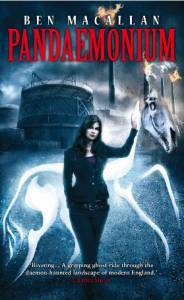 Publishers are stubborn, and they never leave you alone. They kept at me, until at last I did what they wanted; I sat down and thought about cover images, and creatures out of English myth (Desdæmona starts with werewolves and vampires, just to establish the milieu, but moves on quickly: it has Nine Men's Morris and the Green Man, inter alia), and ended up with a creature out of English landscape. I asked Vinny if he could draw a White Horse in the Uffington sense, a horse cut from chalk and light, with a skull like a Mari Lwyd. Which Desi could ride.

As it turned out, he could and did. So then I had the central image, a hellride to build towards; which tied in nicely with the transport motif in the first book. That's buses and bikes and boats, largely; this one has the Tube and the Dockland Light Railway and roller-blades and the White Horse. Does it show, I wonder, that I'm not a driver...?

Not a Londoner, either. I was glad, I confess, to bring Desi north. Sowing chaos, of course, as she goes, leaving pandaemonium in her wake. What lies ahead of her? Daemonogamy, apparently. Poor girl.

More about Book 1: Desdaemona and Book 2: Pandaemonium
Return to Novels or return to home page.